AC Milan head coach Vincenzo Montella insists that the Rossoneri are still on the right path despite their disappointing 2-0 defeat to AS Roma on home soil. 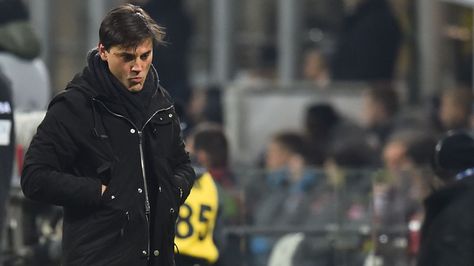 The Rossoneri are said to have the ambition of securing a Champions League spot for the campaign after having coughed up more than 160 million pounds on 11 players including Leonardo Bonucci, Andre Silva and HakanCalhanoglu.

Edin Dzeko and Alessandro Florenzi bagged the goals for AS Roma, who are now six points adrift of leaders Napoli with a game in hand. As a result, Montella’s side have suffered back-to-back defeats to Sampdoria and Roma respectively, and this had led to murmurs across social media that Carlo Ancelotti could make a surprise return to Milan, where he enjoyed most of his success a decade ago.

Speaking after the game, Montella was optimistic that the club are still moving on the right side, and admits that his side did not have much luck against their Serie A rivals, he said: “It was our best match in terms of showing continuity, and our attitude was right. Let’s not forget that nine of the 11 players are new — they are the present and future of Milan. With a bit of luck, it could have ended differently. We must be satisfied with the spirit we showed in the game and we were on a par with them, even going down to 10 men didn’t break us up. I think we’re on the right path and I’m also happy with the quality of the game.”

Milan currently find themselves stranded in seventh place with just 12 points, and they are already seven points behind Napoli, who have made a perfect start to the season. Juventus were held to a 2-2 draw by Atalanta in their most recent outing, and the Bianconeri could face their stiffest draw for the Italian crown in years with Napoli and Inter Milan in good form in the early part of the campaign.