New Manchester United manager David Moyes has hinted that the club’s Italian striker Federico Macheda and Portuguese midfielder Bebe have no futures at the club after both the players were left out of the club’s pre-season tour to Asia and Australia.

Macheda burst on to the scene in 2009 when he scored a last minute winner against Aston Villa to effectively hand United the title in his debut match for the Red Devils, but since then, he has failed to get into the team at any time and although he was given his chance by Sir Alex Ferguson in the League Cup matches and a few Premier League matches as well, but he never managed to get settled. 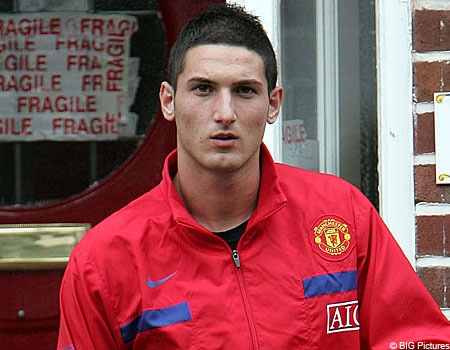 Sir Alex wanted the player to get as much exposure as possible and loaned him out to Italian club Sampdoria in January in 2010 but he only managed a couple of games at the club before they were relegated. Having spent last season on loan at German club Eintracht Frankfurt, the Germans are now trying to thrash out a deal to bring the player permanently to Germany.

Meanwhile, Sir Alex Ferguson’s big gamble in Bebe has also failed to pay off and United are looking to offload the Portuguese player to free up some funds. Bebe has not played a competitive game for Manchester United since he was sent on by Sir Alex Ferguson in a League Cup match in 2011 and spent the last two seasons on loan, first at Besiktas and then back home in Portugal with Rio Ave.

With Moyes now assessing the players at his disposal at the club in pre-season, it seems Federico Macheda and Bebe are completely out of his plans.